What is this data?

In August 1998 ~10.000 km2 area over the eastern volcanic zone of Iceland were measure with an airborne SAR (EMISAR) from the Electromagnetic Institute (now a part of DTU Space) of the Technical University of Denmark. EMISAR measured two kinds of data: A C-band (5.3 GHz) interferometric data set for topographical modeling and an L-band (1.25 GHz) fully polarimetric data set (HH, HV and VV polarizations).

A DEM with 5mx5m resolution was produced from the interferometric data. The DEM was corrected with GPS data obtained of road and paths in the region. The estimated accuracy (95% confidence) of the corrected DEM was 2.5 m. For further details on the EMISAR data obtained in 1998 of Iceland see the  M.Sc. thesis of Eyjólfur Magnússon as well as Dall (2003), Magnússon et al. (2004, 2005a, 2005b). 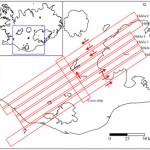 The area measured by EMISAR in August 1998. The figure shows the names of the strips and alignment and flight direction of the aircraft compared to the strips. Strips named Hekla 1-6 was measured 12th of August, while the crossing strip was measured 10th of August.

Where is it available?

Requests to use this data should be sent to eyjolfm@hi.is

Similar data set (not available at IES) was obtained over the northern volcanic zone, but only part of the data has been fully processed. For details see Haack et al. (2006)